Zoë Murdoch lives in Belfast and has been based at QSS Studios since 2001. In 2012 she was elected as an Associate Academician of the Royal Ulster Academy. Murdoch has had two solo shows in the Queen Street Studios Gallery and a one person exhibition at the Fenderesky Gallery, Belfast. Murdoch’s work has been exhibited in a wide range of group and theme based shows throughout Belfast and Ireland and has been included in shows in London, China, Hungary, Nice and America. She received the ‘Robinson Mc Ilwaine Architects “Original Vision” Award’ from the RUA in 2010 and 2007. Her work is part of the Arts Council of Northern Ireland’s Collection and numerous private collections.
Murdoch’s works are generally drawn from memories, literature and external influences that have struck a deep chord within her. An essential repetitive theme within Murdoch’s work is boxes – containers which have connotations of secrets, protection, mysteries… Her art incorporates found objects, collage, photography and text and she often relies on chance in the way she sources materials; abandoned artifacts, objects dropped on the street, a sentence from a damaged book; other people’s rejections become her treasure. 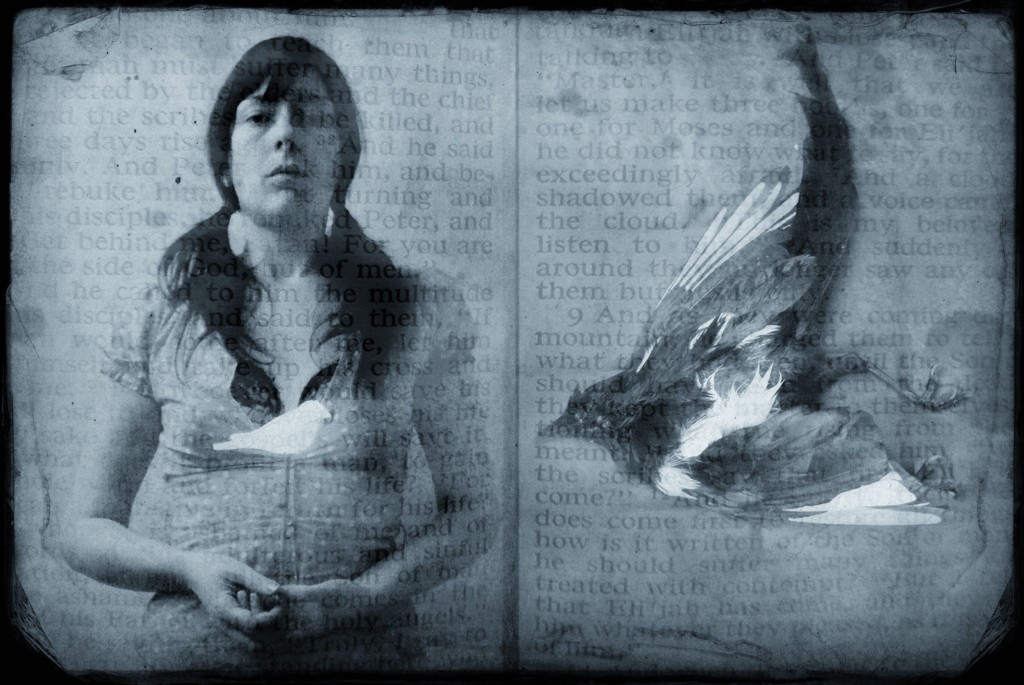 About your artistic career

You have been based in Belfast for a long time, if your living in the conflicted society effects you as an artist, let me know how it effects.

I have lived in Belfast for 20 years and overall have enjoyed my experiences here, but there have been times when living in our conflicted society has had huge negative impacts upon my personal life, fortunately these situations only temporarily effected my art practice. Art is a wonderful way to escape from distressing events.
I am lucky to live in a more neutral area of the city but I am very passionate about the need for a peaceful and creative future for Belfast so I very much enjoy being an outreach artist for the Golden Thread Gallery and North Belfast Interface Network especially being part of the ‘Draw Down The Walls’ project – which is concerned with “Creating the conditions to imagine a city without barriers”. The workshops we take part in provide us with a unique opportunity to work with young people, bringing people from different cultures together to discuss ideas through art and language and create meaningful artworks to articulate their hopes and fears. The positive feelings from these workshops have had a wider influence on my own work. I feel it is vital to strive for a brighter future for Northern Ireland that does not necessitate interface walls, hate or separation.

You often use the found objects as materials for your work. Let me know if you have any idea how that way brings the meaning in your art.

Found objects are vital for my art work. These objects drive each individual piece sometimes in totally unintended directions that develop purely due to one new component being introduced. I am quite obsessed with the things I find, their secret histories and stories. Much of my work is themed around nostalgia, a preservation of memories and personal history and many of the materials I use are donated from family members and friends which give them even deeper meaning. Yet each object, no matter how seemingly insignificant, is a small treasure to me; a tiny bit of rusted metal, a dead butterfly – each thing has it’s own reason to be included in a work, and I am very fussy that it is necessary to the story I am telling, everything is there for a reason. In my work I also frequently use found text from old books but I won’t use just any words, they have to relate.
To me found objects can become almost fated; I have found the most intriguing things that seem strangely and meaningfully connected to something I am currently working on, this moves my practice towards ideas of coincidence, chance and serendipity. Most importantly it keeps me interested in the work which I hope means that viewers will also develop an interest in the pieces and hold a wonder for why each item is there and what it is trying to say. However this is also the reason that I often don’t deeply explain the personal meanings behind my works as I want viewers to find their own meaning and create their own story…

How do you think about the nuclear disaster in Fukushima as a foreigner who lives outside of Japan? What kind of meaning you will get to participate in “Arafudo Art Annual 2014” which will be held in Fukushima, Japan as a foreign artist, let me know about them.

I am very excited to have been invited by Shiro to take part in “Arafudo Art Annual 2014″ for me it is a very interesting and important continuation of my art practice over the past few months as I have predominantly been working and exhibiting pieces inspired by a trip to Chernobyl and Pripyat in October 2013. The trip really opened my eyes to how huge and dangerous the situation there really was (and still is) the trip also brought the nuclear disaster in Fukushima back to my mind and reminded me how the negative effects of such disasters last for many many years.
This knowledge terrifies yet fascinates me and my interest in nuclear disasters and their potential threat continues to grow. These situations also relate in many ways to personal interests that I have in the themes of apocalypses and the destruction and regrowth of disaster stricken areas, the evils that beauty can hide… Unfortunately societies don’t always learn from the mistakes of others and we now seem to live in a world where natural and man-made disasters are more and more frequent; the smallest accident in a nuclear power plant can have devastating consequences for many with untold long term damage. We live in a fragile world and as an artist one is sometimes provided with an opportunity to illustrate our perception of the harsh realities of the world to the world. This opportunity to show my work in such a significant setting is very meaningful to me. 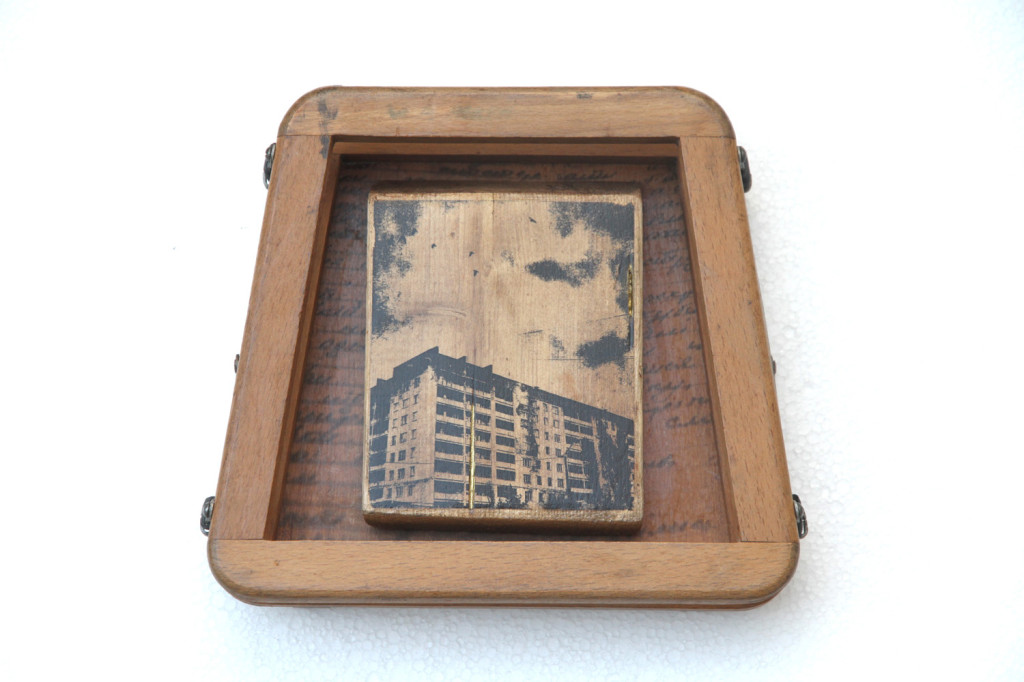 About the work you will exhibit at this time.

These works were created using photographs I took during my trip, I have printed the images onto wood which is my favourite material to work with, due to it’s uniqueness and timelessness. Whilst researching Chernobyl I found that the word itself means ‘Wormwood’ so I have chosen to use it as the title for the overall series I am currently working on. Interestingly found in the Book of Revelation is a quote “and there fell a great star from heaven, burning as it were a lamp, and it fell upon the third part of the rivers, and upon the fountains of waters; and the name of the star is called Wormwood; and the third part of the waters became wormwood; and many men died of the waters, because they were made bitter” I discovered the quote in a blog about biblical prophecies and omens and I found this notion really unsettling yet inspiring and it became a driving force for the theme of the works – in a way they are small memorials. The dead trees in Chernobyl, which died from radiation at the time of the disaster, were really depressing sights yet surrounding them are trees in full bloom, alive, thriving and beautiful. The wood I prefer to use is reclaimed and neglected, discarded offcuts; this gives the wood, to me, a new purpose, something created rather than destroyed – nothing need be a lost cause.

Let me know about the reason why you went to Chernobyl to realize the project.

Initially I wanted to travel to the Ukraine just to see what it was like after I had read the book and watched the film version of ‘Everything Is Illuminated’ by Jonathan Safran Foer, I loved both versions; the predominant themes of art and collecting, memory and culture were set in a curious, historic country and they really inspired me to visit Kiev. When I researched going there I came across the trip to Chernobyl and became determined to go as it really seemed to be somewhere that I felt would aid my insight into the world around me and benefit my art practice especially due to my interest in abandoned places and regrowth. Much of my recent practice is driven by a concern for the condition of urban society and the secret histories of the discarded. I am fascinated by the tragic beauty of decaying architecture and the narratives and melancholic force contained within derelict spaces, Chernobyl seemed too interesting not to go when the opportunity was there, and due to to the fact that the area is not maintained in time it will be too dangerous to visit as the buildings collapsie and the earth reclaims the remnants left.

If you have anything particular you would like to tell us about the trip to Chernobyl, feel free to write down about it.

I would recommend anyone visit though the situation in Ukraine currently is not ideal for travel there!

If you have anything or any people you are interested in recently, let me know about it with the reason why.

I recently spent two weeks at an artist colony with the Ernö Tolvaly Foundation in Füle, a small remote village in Hungary. At the colony many of the other artists attending were quite traditional painters so I spent a lot of time watching the artists paint and then joined them in discussions about their techniques and we even collaborated on some works. I now have some interest in using painting in my work which is something I have not really practiced for some time. Whilst there I mostly relied on sourcing found objects to create art, I worked on producing some collages from old damaged illustrations of writers that I found in a shed in the garden of our house. I had no internet connection so was unable to research the writers and their writing so I am now looking forward to being able to do this and hopefully use some of their words as inspiration for future works I plan to create based on my experiences in Hungary.

When you make your art, if you have anything you try to care particularly, please let me know about it.

I care very much about attention to detail, I like to try and finish each work to the best quality that I can. Ultimately I want to create things that I find beautiful, things that tell a story, hold a mystery and respect the materials used. I hope then that people will look deeply into my work and try to find a meaning behind it, my meaning or theirs. When a viewer tells me they are touched by my work and that it has made them think or feel certain emotions that is when I am most content about it.

If you have your own way to enjoy art, let me know about it.

I must admit I don’t always follow what is happening in the wider art world as there is so much to see and experience within Northern Ireland’s arts and culture scene, Literature is one of my main passions and inspirations. I’ve been lucky to have been invited to show in some literature themed shows and this always provides me with an excellent challenge to create related works, I have often continued working on these themes even when the exhibitions are long over.
Another way that I daily use to create work is through photography, with a phone or camera, it is perfect as I can use it any time, in any place, it is a frequent joy and important part of my work overall.